Glad I'm not alone to find a interest on this idea / feature :-)


Ryan wrote:You could assign any number of random dates and times to a task and each occurrence of the task would appear as a block on the calendar where they could be dragged or modified visually individually in various ways.

Yes, this is definitely the idea.

I have still no idea of implementation other than the one I've made above here viewtopic.php?p=3832#p3832. But I agree with Dan / abstr in his last post.

PS: I have to improve my organizational system in TDL in many ways, so I can't say the lack of this feature is really missing for me currently.
Top

If you distil this down, it's actually a common feature in many apps that include a calendar or calendar-like view. It's just that you have to think about it as a recurring task not some entirely different feature.

An example is Google Calendar (which in the view below is similar to TDL's Week Planner view, but the concept would be similar for the Calendar view).

The key is that each recurring item allows you to customize individual recurrences to change their attributes. The previous app I used allowed this too. I found it extremely valuable, but unfortunately it was kind of clumsy to use in that app. The Google Calendar implementation of this is particularly good although I have seen others that are good too. 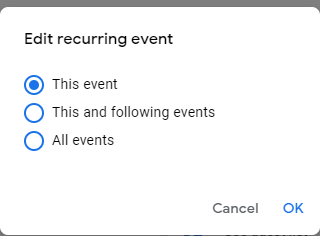 You end up with this, which I think is what you are talking about. I set up a daily recurrence and then simply deleted the recurrences I didn't want and changed the start and end times of the ones I wanted to keep. Each of the recurrences is the same event.

In addition, each recurrence can be dragged around the calendar to change its start and/or end times or even dragged to a different day. Very nifty and efficient.

So this is really just an enhancement of recurring tasks, making them more flexible and powerful. And I think it satisfies your "time blocking" task management use. In fact, in TDL, if you are lazy like me you could say conceptually that ALL tasks are recurring tasks. The ones that only occur once are recurring tasks with zero recurrences. 🙂

PS: I am not implying this would be easy to implement! I can't even imagine how difficult it would be! It's way beyond my paygrade! But yes, it's also on my wish list and I think a very productivity enhancing feature. 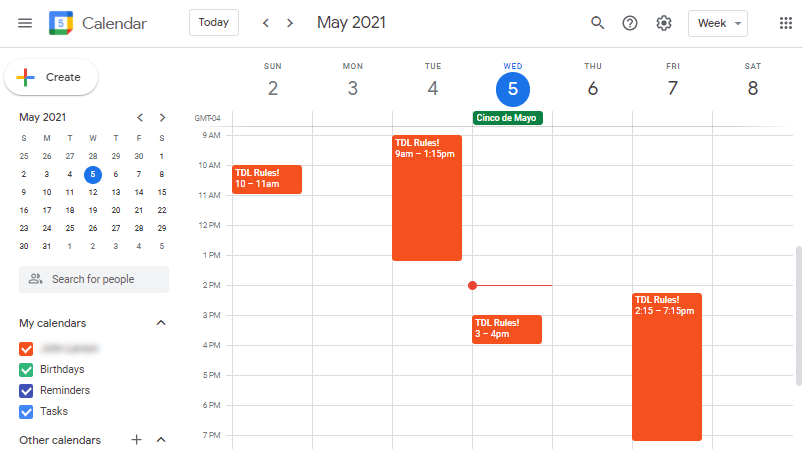 I think I got lost in this topic about time blocking. My initial motivation was to emphasize that start and due dates, which are used for task & project management and Gantt, are often not appropriate for time management, and thus for the Week Planner, which especially aims at managing our week. For this reason, I feel a certain disbelief about the Weak Week Planner, I must admit.

So I though of an additional field "time block" that could allow to split a given task into blocks that could be placed in the Week Planner, while keeping the accurate start and due dates of the global task. My idea was there could be a "task picker" in the WP from which the tasks could be dragged and dropped in the week view in order to create blocks of time.

But it seems this idea leads nowhere. There are obstacles for a concrete implementation. It is not implemented in the other task management programs. So it seems we have to stick with start and due dates here.

And place these subtasks in the WP.

As for Time blocking, it is still possible to create as many subtasks as we need in the WP:


All this to get here... This is not as neat and handy as we could hope, yet it's still effective.

And to make the whole thing more efficient and flexible, there is indeed the suggestion to make the recurring task feature more powerful:

- see the future occurrences in advance in the calendar / WP -> already implemented in TDL 8.1
- possibility to limit the number of occurrences (recurring task with a fixed lifetime) -> idea put forward by Dan / Abstr earlier in this topic
- possibility to customize individual recurrences to change their attributes (great suggestion / contribution from Ryan): delete a recurrence, change the start and due dates of a recurrence.
On this, there is indeed great inspiration to find in major calendar programs (Outlook, Google Calendar, etc.)

So all this topic leads indeed in the end to the suggestion to improve the task recurrence feature (as it was my former intention before I got lost in other ideas... - see the topic title). Sadly I can't see no other relevant suggestion to make!
Top
Post Reply
23 posts